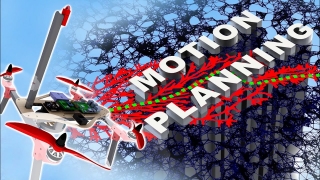 This fully autonomous drone has an onboard computer ‘brain’, camera ‘eyes’, and an algorithm that generates the fastest path around unknown obstacles as they’re detected mid-flight. Let’s see ArduPilot do that.

GPS-denied, vision-based autonomy is a very popular topic in robotics right now. Most importantly: once you know where you are, how do you most efficiently navigate around the environment without bumping into things? Variations of Dijkstra’s algorithm such as A* or D* Lite can be used to quickly and efficiently calculate the optimal path over ‘nodes’, or potential waypoints. This is the same general algorithm used in google maps to find the fastest route through traffic. Putting all of this together on a flying drone took a bit of specialized hardware, some help from Robot Operating System (ROS), and a whole lot of testing. Yes, there are pre-existing packages for pretty much every feature I implemented, but where's the fun in using someone else's code? If you learned something, I’d greatly appreciate a like on this video and maybe even a subscription to my channel for more projects like this in the future.

An unmanned aerial vehicle (UAV) (or uncrewed aerial vehicle, commonly known as a drone) is an aircraft without a human pilot on board. UAVs are a component of an unmanned aircraft system (UAS); which include a UAV, a ground-based controller, and a system of communications between the two. The flight of UAVs may operate with various degrees of autonomy: either under remote control by a human operator or autonomously by onboard computers referred to as an autopilot. from Unmanned Aerial Vehicle -... See More

An embedded system is a computer system—a combination of a computer processor, computer memory, and input/output peripheral devices—that has a dedicated function within a larger mechanical or electronic system.It is embedded as part of a complete device often including electrical or electronic hardware and mechanical parts. Because an embedded system typically controls physical operations of the machine that it is embedded within, it often has real-time computing constraints. Modern embedded... See More

Guidance, navigation and control (abbreviated GNC, GN&C, or G&C and within the context of NASA operations, often pronounced 'Gintsee' or (IPA) ʤɪnsiː) is a branch of engineering dealing with the design of systems to control the movement of vehicles, especially, automobiles, ships, aircraft, and spacecraft. In many cases these functions can be performed by trained humans. However, because of the speed of, for example, a rocket's dynamics, human reaction time is too slow to control this movement... See More
This is all we have. Message us here if you would like to recommend a topic for this resource.
Have a journey you would like to recommend for this resource? Message us here