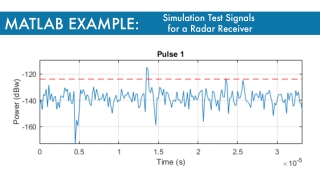 This example focuses on a pulse radar system design which can achieve a set of design specifications. It outlines the steps to translate design specifications, such as the probability of detection and the range resolution, into radar system parameters, such as the transmit power and the pulse width. It also models the environment and targets to synthesize the received signal. Finally, signal processing techniques are applied to the received signal to detect the ranges of the targets.

Radar (radio detection and ranging) is a detection system that uses radio waves to determine the distance (ranging), angle, or velocity of objects. It can be used to detect aircraft, ships, spacecraft, guided missiles, motor vehicles, weather formations, and terrain. A radar system consists of a transmitter producing electromagnetic waves in the radio or microwaves domain, a transmitting antenna, a receiving antenna (often the same antenna is used for transmitting and receiving) and a receiver... See More
This is all we have. Message us here if you would like to recommend a topic for this resource.
1 items 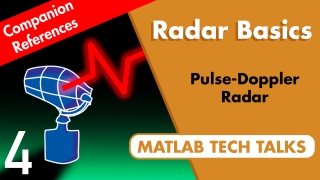 These are the resources that are referenced throughout the MATLAB Tech Talk video I made called "Pulsed-Doppler Radar | Radar Basics, Part 4"