In mathematics, a Padé approximant is the "best" approximation of a function by a rational function of given order. Under this technique, the approximant's power series agrees with the power series of the function it is approximating. The technique was developed around 1890 by Henri Padé, but goes back to Georg Frobenius, who introduced the idea and investigated the features of rational approximations of power series.

The Padé approximant often gives better approximation of the function than truncating its Taylor series, and it may still work where the Taylor series does not converge. For these reasons Padé approximants are used extensively in computer calculations. They have also been used as auxiliary functions in Diophantine approximation and transcendental number theory, though for sharp results ad hoc methods— in some sense inspired by the Padé theory— typically replace them. Since Padé approximant is a rational function, an artificial singular point may occur as an approximation, but this can be avoided by Borel–Padé analysis. 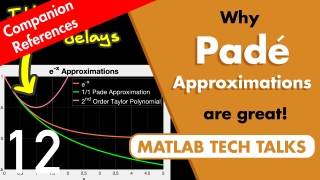 Companion resources to "Why Padé Approximations are great! | Control Systems...

These are the resources that are referenced throughout the MATLAB Tech Talk video I made called "Why Padé Approximations are great! | Control Systems in Practice, Part 12".