Vector Derivatives (the Equation of Coriolis) and the Angular Velocity Vector 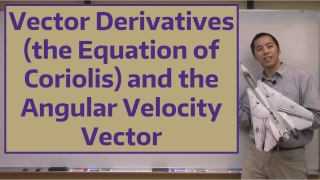 In this video we develop the Equation of Coriolis which describes how a vector in a rotating reference frame changes from the perspective of an observer in a non-rotating reference frame. We will see that this is related to the angular velocity vector describing the relative motion of the two frames. As such, we also investigate some properties of this angular velocity vector.

Flight dynamics is the study of the performance, stability, and control of vehicles flying through the air or in outer space.It is concerned with how forces acting on the vehicle determine its velocity and attitude with respect to time. For a fixed-wing aircraft, its changing orientation with respect to the local air flow is represented by two critical angles, the angle of attack of the wing ("alpha") and the angle of attack of the vertical tail, known as the sideslip angle ("beta"). A sideslip... See More
This is all we have. Message us here if you would like to recommend a topic for this resource.
Have a journey you would like to recommend for this resource? Message us here