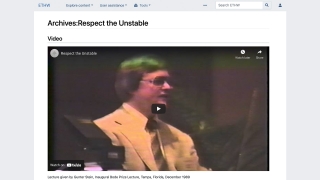 An understanding of fundamental limitations is an essential element in all engineering. Shannon's early results on channel capacity have always had center court in signal processing. Strangely, the early results of Bode were not accorded the same attention in control. It was therefore highly appropriate that the IEEE Control Systems Society created the Bode Lecture Award, an honor which also came with the duty of delivering a lecture. Gunter Stein gave the first Hendrik W. Bode Lecture at the IEEE Conference on Decision and Control in Tampa, Florida, in December 1989. In his lecture he focused on Bode's important observation that there are fundamental limitations on the achievable sensitivity function expressed by Bode's integral. Gunter has a unique position in the controls community because he combines the insight derived from a large number of industrial applications at Honeywell with long experience as an influential adjunct professor at the Massachusetts Institute of Technology from 1977 to 1996. In his lecture, Gunter also emphasized the importance of the interaction between instability and saturating actuators and the consequences of the fact that control is becoming increasingly mission critical.

After more than 13 years I still remember Gunter's superb lecture. I also remember comments from young control scientists who had been brought up on state-space theory who said: "I believed that controllability and observability were the only things that mattered." At Lund University we made Gunter's lecture a key part of all courses in control system design. Gunter was brought into the classroom via videotapes published by the IEEE Control Systems Society and the written lecture notes. It was a real drawback that the lecture was not available in more archival form. I am therefore delighted that IEEE Control Systems Magazine is publishing this article. I sincerely hope that this will be followed by a DVD version of the videotape. The lecture is like really good wine; it ages superbly. — Karl J Åström, Professor Emeritus, Lund University, Lund, Sweden (2003)

In mathematics, stability theory addresses the stability of solutions of differential equations and of trajectories of dynamical systems under small perturbations of initial conditions. The heat equation, for example, is a stable partial differential equation because small perturbations of initial data lead to small variations in temperature at a later time as a result of the maximum principle. In partial differential equations one may measure the distances between functions using Lp norms or... See More
This is all we have. Message us here if you would like to recommend a topic for this resource.
Have a journey you would like to recommend for this resource? Message us here